Rhen decides to cut her hair. Set before the party recruits Pirate John and Mad Marge. (Includes artwork at the end of the fic.)

I really just wanted to do something with the scenario of Rhen with short hair.

(See the end of the work for more notes.)

It's so long, Rhen thought. It's long and it gets in the way.

Every morning she'd get up a little earlier than most, because her hair is a little bit more tricky to deal with. The soft curls had a special beauty regimen to keep them healthy, but she never really let her hair down anyway, except for bedtime. It was heavy on her head, and sometimes, stray strands would fall over her eyes, stick to her neck, and give her prickly sensations similar with bugs, goo, and dirt from all that traveling.

What's more, the hair care products she'd been buying was just eating up space inside her backpack. Not to mention, they always cost a fortune and it was a pain to stock up on them when she could grab aquifoliums instead. Braiding them didn’t take up that much time, but all the cons outweighed the pros.

So, one morning, she woke up, and went straight to the bathroom. She took her purple locks and gazed it the soft curls. It was pretty, yes, but it was also annoying.

Then, she took her sword and slashed those annoying tresses away. She trimmed her hair using scissors, and once she figured out her new hairstyle was cute enough on her, she left the room and proudly bragged her new do.

Elini's voice and eyes filled with confusion when they met in the hallway.

"A lady should keep her hair long!"

Galahad protested, but then again, he was always the old-fashioned sort.

"Awww, you look cute! Did you cut your own hair?"

Te'ijal assured, with a wink, that she too can help with the haircut next time.

Rhen had never wanted to slap Dameon so badly before this, because he was near tears over her hair and he was definitely very, very disappointed, and this was so hypocritical of him considering he was also pretty experimental with his half-shaved hair, but he was near tears, so she decided against slapping him.

And Lars? Lars, his eyes widened as soon as he saw her. He circled her like a hawk, judging her haphazard decision of the week with an amused smile. Finally, he stopped, waggled his eyebrows in approval, and said:

"Do you like me so much that you decided we should have matching hairstyles?"

Rhen definitely punched Lars on the shoulder for that - but he was right. They did have matching hairstyles now. Rhen hadn’t intended for that to happen, but with their braids, the bob cut, and the Shadwood-issued uniforms and tattoos, they seemed like a perfect matching pair.

And they had a good laugh about it. 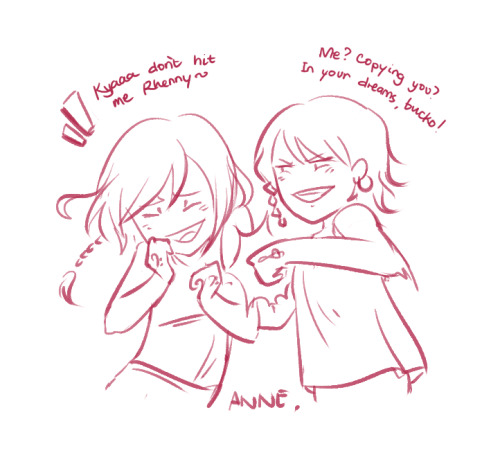 Sorry, I had limited imagination and all I can do to show Dameon's very emotional self is that. I would be open to suggestions for future fics.